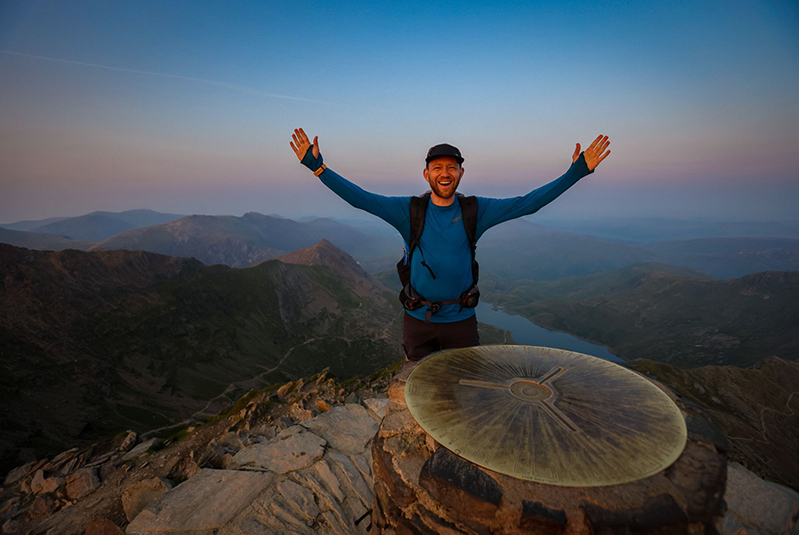 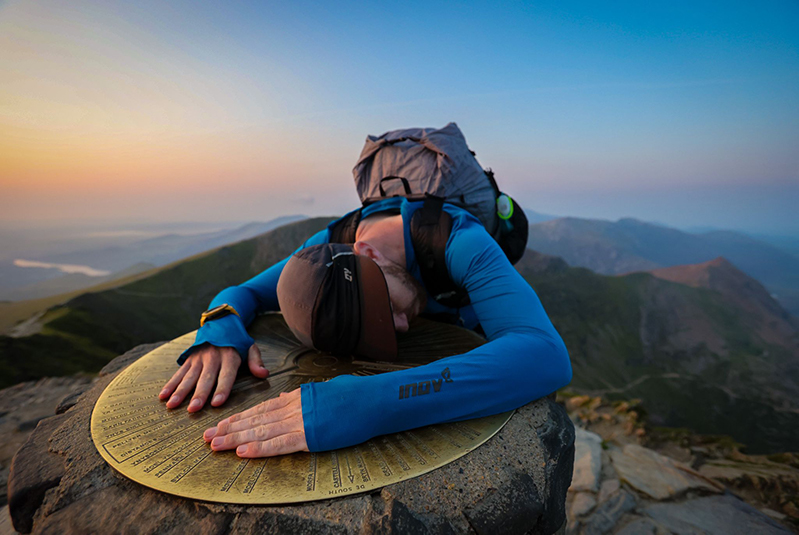 Above images: James at the summit of Snowdon, on his successful National Three Peaks record. Photos courtesy of Dave McFarlane.

Fast-hiker James Forrest is to make a record attempt at the National Three Peaks, starting on Monday (August 9th). The inov-8 ambassador will hike solo and unsupported, covering the highest points in Scotland (Ben Nevis), England (Scafell Pike) and Wales (Snowdon), plus all the ground in between.

The Fastest Known Time for a solo and unsupported attempt is thought to be 19 days, 18 hours & 35 mins, by Tina Page. The fastest supported time is 9 days, 11 hours & 39 mins, by Tom Mountney. James is aiming to hike the distance of 17 marathons in 17 days.

Ahead of his fast and light adventure, James – who will wear inov-8 hiking boots and kit– wrote the following blog post for us:

I love peak-bagging. I’m a total peak-bagging geek. But, after spending three years climbing 1,001 mountains across the UK and Ireland (including all 282 Munros) and then bagging the Wainwrights in a 14-day solo and self-supported record, I found myself a little jaded with summit tick-lists this year. 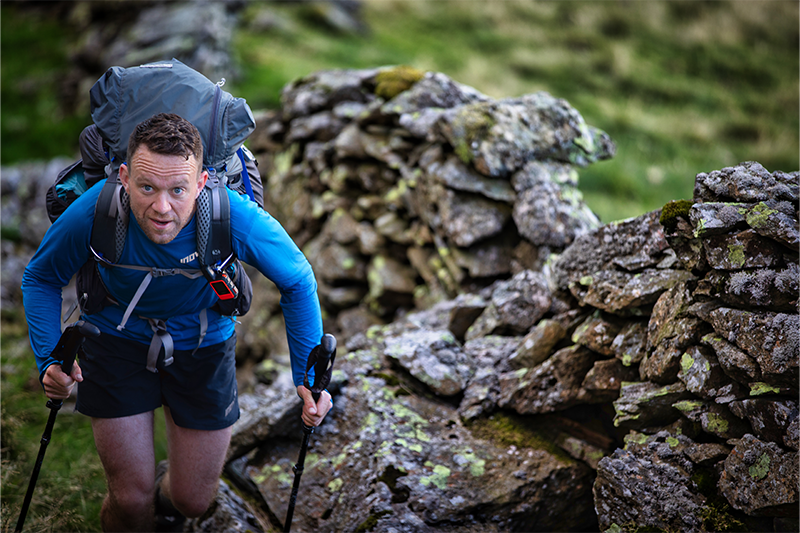 James during his solo-hike of all 214 Wainwrights

Instead, I turned to long-distance trails, and it immediately renewed my passion for fast-hiking adventures. This spring and summer I walked the 154km West Highland Way in three days, the stunning 299km Pembrokeshire Coast Path in six days during a rare Welsh heatwave, and the 293km Coast to Coast in seven days. Each journey was good for my soul. It felt like time for solitude, self-reflection and quiet; for living simply, getting back to nature and renewing my mental health; and for testing myself and going outside my comfort zone. I relished it all.

These experiences have inspired me to take on my next big adventure. This August I will attempt to complete the National Three Peaks on foot, climbing Ben Nevis (Scotland), Scafell Pike (England) and Snowdon (Wales) – and walking every mile in-between them – in a self-supported, solo adventure. 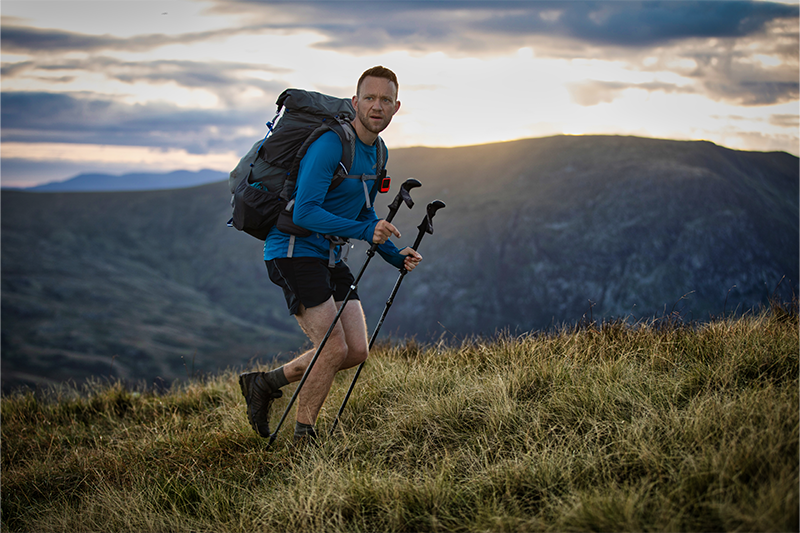 The Fastest Known Time (FKT) website doesn’t list an official record for a self-supported completion of the National Three Peaks, although extensive internet research has uncovered a potential record of 19 days 18 hours and 35 minutes held by Tina Page. The website does say the main record, with support, is currently held by ultra-runner Tom Mountney with an incredible time of 9 days 11 hours and 39 minutes. It has come to light, however, that the record (over a longer coast-to-coast route too) is actually held by race walker Ann Sayer, who did it in a mind-boggling 7 days 31 minutes in 1979. Ann started at sea level at the slipway in Fort William (Scotland) and finished at sea level in Caernarfon (Wales). Amazing! 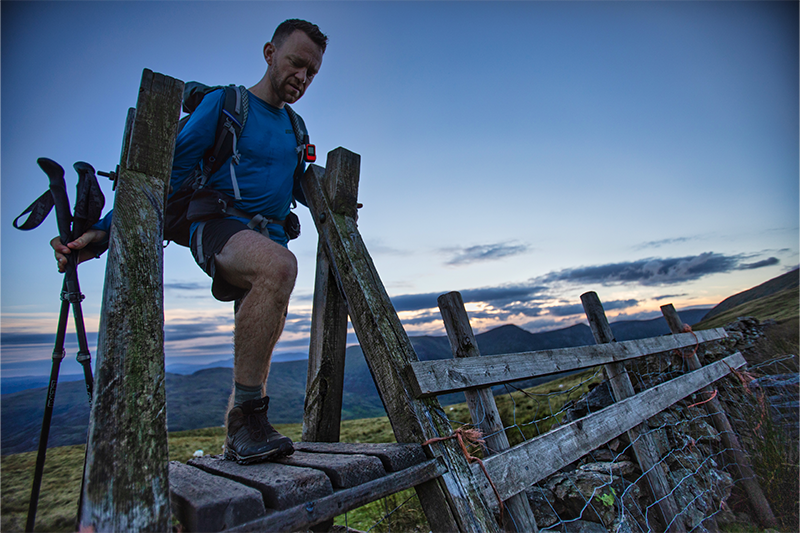 My challenge is classed as self-supported because I will not have a support crew or any vehicle support, will walk alone and be self-reliant throughout. I’ll carry everything I need on my own back.

My route (which can be viewed on my live tracker here) begins up & down Ben Nevis before following the entirety of the West Highland Way to Glasgow. Next comes a long section through south-west Scotland, including part of the Southern Upland Way, to Annan and beyond to Carlisle, before enjoying the best of the Lake District on the Cumbria Way (with a quick detour up Scafell Pike). Then it’s a rather long urban slog from Kendal via Lancaster, Preston, St Helens, Runcorn and Ellesmere Port, before enjoying the coastal paths of North Wales and detouring inland to finish with an ascent & descent of Snowdon. 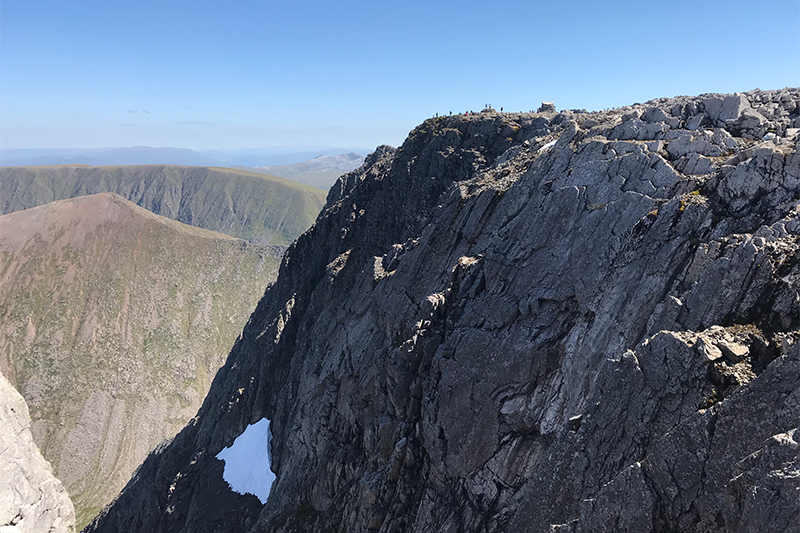 The summit of Ben Nevis, Scotland

I have created this bespoke route myself, but it mostly follows the established route used by other challengers (and thanks to ultra-runner Alex Staniforth for sharing his route with me, after he narrowly missed out on the supported record by just over an hour).

The main route change I have made is to take the coastal paths of North Wales from Ellesmere Port towards Bangor, via Prestatyn and Conwy, rather than opting for a more direct (but boring) road route through North-East Wales.

Some runners also choose to take a ferry or train across the River Mersey at Birkenhead over to Liverpool, but I have chosen to walk across the Runcorn Bridge further east – thus ensuring my entire journey is self-propelled. 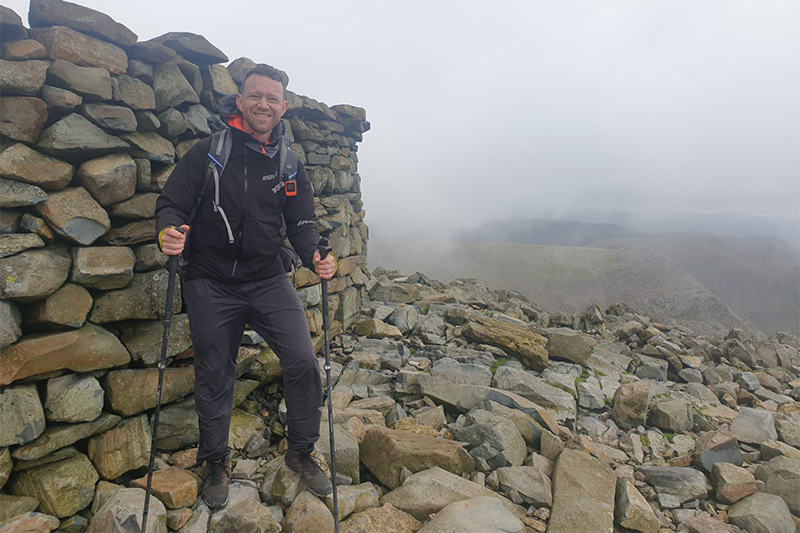 James on the summit of Scafell Pike, England, during his epic Wainwrights adventure

Throughout much of the route, it’d be faster for me to power along an A road, but I want to enjoy the hiking and have thus selected quieter trails wherever possible. Looking at stats on a navigation app, I think 75% of the route will follow off-road trails and 25% will be on roads.

You can complete the National Three Peaks northbound or southbound, but I have chosen to start in Scotland and work my way south (mostly because it looks downhill on a map!) I will start my tracker at the base of Ben Nevis next to the youth hostel – the official start of my route – and turn it off once I descend off Snowdon and arrive at Victoria Terrace in Llanberis, the official end. This approach is considered the most ‘authentic’ and mirrors how Alex took on his running record attempt. 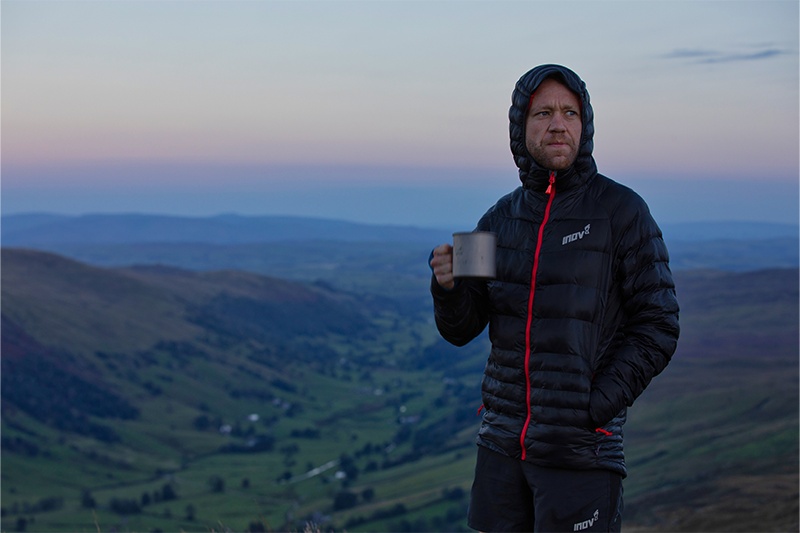 The only official checkpoints I have to go through are the three summits, but the online tracker will track my every move and log me through daily checkpoints. In terms of accommodation, I will camp for seven nights (including four wild camps) and stay in hotels for the remainder. I will re-supply with food at supermarkets and shops along the way.

I am aiming to be as light, fast and agile as possible on the trail. The base weight of my backpack, including all camping gear, is under 5kg, and my total weight including food and water is just 7kg.

The same applies to my clothing and footwear too, with inov-8’s fast and light approach working perfectly for me. I’ll be wearing the RACE ELITE 6” SHORTS, BASE ELITE SHORT SLEEVE & LONG SLEEVE BASE LAYERS and ULTRASHELL PRO JACKET (which gives me 20,000mm HH of waterproofing despite the insane weight of just 106g). 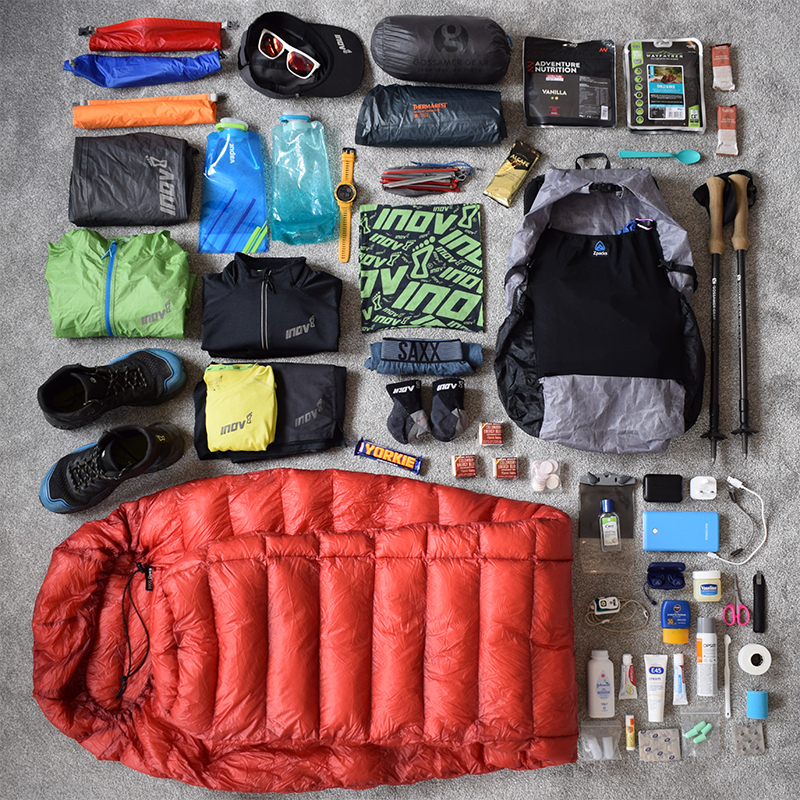 On my feet I’ll have an exciting inov-8 prototype trail boot, which is due to be released soon, and I’ll be using a 38L frameless backpack – a specialist ultralight pack (just 301g) designed for gram-counting thru-hikers.

My adventure starts with Ben Nevis in the early hours of Monday. I’m incredibly excited, as well as nervous. After taking an absolute thrashing from the weather during my storm-battered Wainwrights challenge back in 2020, I’m rather anxious about the conditions I’ll experience, and can feel a sense of PTSD kicking in. I’m expecting a real battle and a rollercoaster of emotions, if this journey is anything like my previous challenges. But, ultimately, I can’t wait to dive back into the deep end of life on the trail. When your entire purpose for a day is just to walk from A to B, life gains a wonderful clarity – and that’s what I’m most eager to taste again.

Discover more about our range of award-winning hiking boots and shoes. 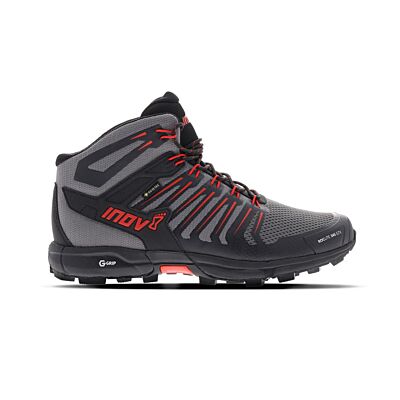 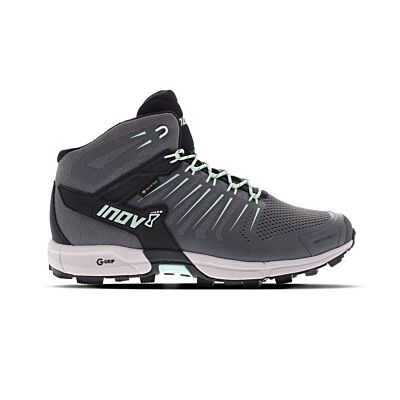 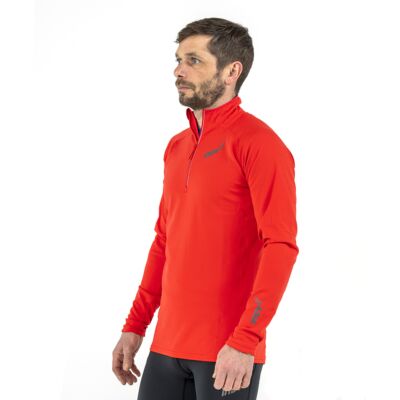 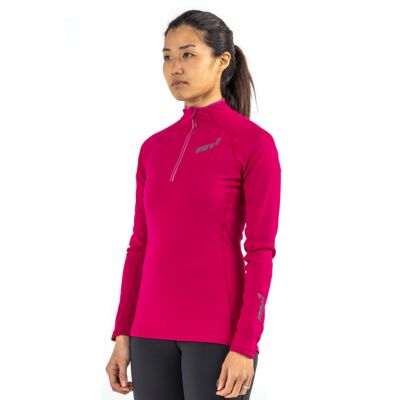